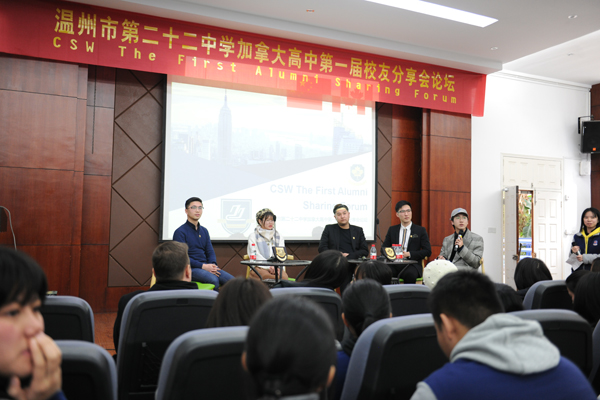 At the end of the December, CSW held their first ever alumni event. We invited many CSW graduates. The guests were varied and were from different walks of life. For example, one of them is a freshman at the University of Hong Kong, while the other students had already graduated from university and had taken up many varying and interesting careers. They came to CSW to talk about the advantages of combining Chinese and western education. They also shared their overseas experiences with our students.

What impressed me the most was Yolanda who graduated last year. She is now studying financial services at a university in Hong Kong. She said that her studies while at CSW helped to lay down a firm academic foundation for her. This foundation is helping her a lot at university. The BC classes helped her in many aspects. For instance, she did a lot of presentations which has helped because she does not feel so nervous when the university professor asks her to do presentations. Another example is that she has a great advantage in English over other students in speaking and writing. While at CSW, she practiced her spoken English nearly every day over three years and she also learned the logical thinking of writing. Furthermore, in regards to the Chinese side of CSW, she firmly believed that the Chinese math also facilitated her understanding. She thinks that both the BC and the Chinese side are integral to her success at university. I found all of the former students very interesting. Some had set up businesses and others had been successful in other ways. It was helped us to know that if we continued studying hard then we will be successful.

CSW students actively participated in the Q & A part at the end of the alumni presentations. Many students have clear goals regarding their majors at university; especially for those students who want to do art, business and psychology. They asked some questions associated with their majors. For example, one student asked what job prospects in psychology are like. Students were also curious about life in university. Many of them asked some funny questions like is the Internet at a Canadian university faster than that in China. Many other students asked specific questions about how difficult it is for students from China to settle in Canada or another foreign country. As we all know, family in China is very important and so being far away from them may be difficult. However, the answers the alumni gave were both very helpful and comforting.

In conclusion, students developed further awareness of the advantages of learning at an integrated educational institution such as CSW. The graduates patiently answered every question from our students. At the same time, students also learned about the culture of different countries. The alumni event was very successful and students enjoyed it very much.